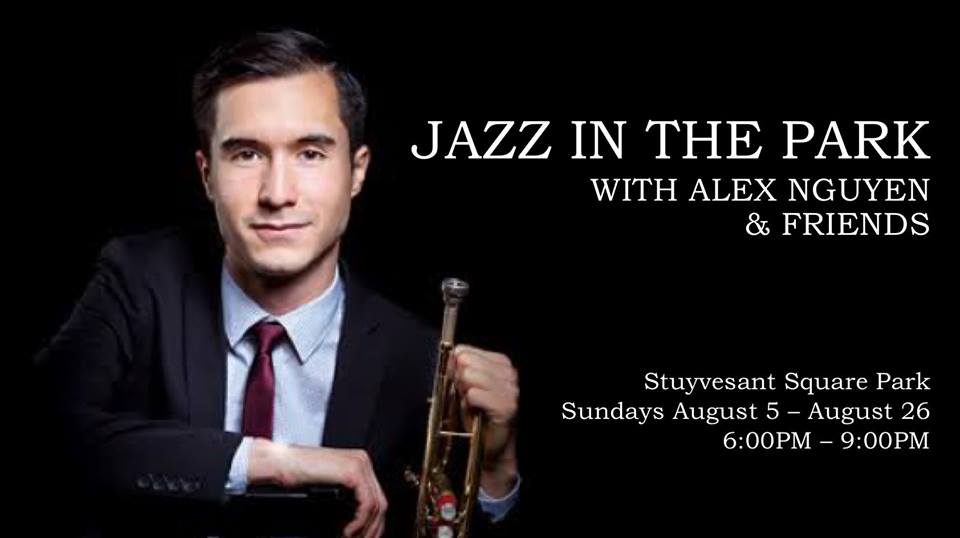 Come listen to jazz under the trees and watch the sun set behind the clouds.

About Alex Nguyen: Since arriving in NYC, trumpeter Alex Nguyen has been establishing himself for his distinctive lyrical and melodic style. The Savannah, GA native has garnered praise for his independent projects, including the Jazz Conceptions Orchestra, for which he arranges much of the material. Alex has appeared with such groups as the Cannonball Adderley Legacy Band, the Curtis Fuller Quintet, and Celebration of Lionel Hampton; and one of his compositions “The First Year” was featured on NEA Jazz Master Kenny Barron’s album The Traveler.

Alex is winner of the International Trumpet Guild Jazz Competition, placed second at the National Trumpet Competition, and was awarded residencies at Betty Carter’s Jazz Ahead at the Kennedy Center, and the Steans Institute for Young Artists at the Ravinia Festival. A graduate of the University of North Florida’s Jazz Studies program where he worked with legendary alto saxophonist Bunky Green, Alex also holds a Masters in Jazz Studies from SUNY Purchase, where he worked with trumpeters Jon Faddis and Jim Rotondi. Alex now serves as music director of St. George’s Episcopal Church where he has embraced its history of singing spirituals, while introducing jazz elements into the service music. He also began its monthly series Jazz in the Cave, and a monthly Jazz Vespers.

Your ticket for the: Jazz in the Park with Alex Nguyen & Friends